Searching for high-quality Blockchain developers? We got you covered! Trio has the resources and knowledge you need to start planning and executing your Blockchain project today.

Blockchain itself is formally defined as a distributed, decentralized, public ledger. This means that at its core Blockchain is a record-keeping technology. With Blockchain, you can record transactions and track assets.

A block in a blockchain signifies the digital information or data that is recorded. Blocks are linked together using cryptography which is essentially a means of keeping information discrete and secure. The cumulation of these blocks creates a chain equivalent to a public database.

The digital information contained in each block consists of three parts.

A single block on a Bitcoin blockchain can store approximately 1 MB of data. In other words, a single block can hold the information of thousands of transactions.

For a block to be attached to the blockchain, a couple of things must happen. Of course, the transaction must occur. It is then verified through thousands of computers distributed across the net.

The transaction data is stored in a block with the information from the first two steps listed above. And lastly, as per the third step, a hash is created. The distinction of one block from another is very important.

If you, for example, make a purchase on Amazon and make a nearly identical purchase just five minutes later, blockchain is equipped to distinguish the two transactions.

Each member of the blockchain network has a copy of the chain, hence the term distributed ledger. Blockchain networks also provide smart contract (chain node) services to applications.

Smart contracts generate blockchain transactions in the first place which are distributed to peer nodes within the network where they are recorded.

What Is a Blockchain Developer?

This role is not unlike that of a typical software developer. But dapp developers must be able to develop smart contracts using tools such as Truffle and Solidity. Dapp developers may also use languages correlated with mobile or web app development like React Native or Java.

Blockchain is considered to be extremely secure. This is because the data in a block cannot be modified; only subsequent blocks can be modified. To do this, there must be a consensus between the network majority. Any malicious activity would be detected immediately.

To add, Blockchain is virtually free. There is a cost for the infrastructure but not transactions themselves. For this reason, businesses can save the bother of paying small fees for every other financial operation.

Overall, Blockchain is a budget-friendly means of building trust between two parties. For businesses who have to make transactions with unestablished clients – whether that be financial or otherwise – having a secure system to do so can be very useful, if not necessary.

Your use for blockchain isn’t limited to money either. There is a multitude of situations where blockchain can be handy including copyright protection, digital voting, reward programs, medical archiving, and more.

Most people tend to associate blockchain with Bitcoin. But this is just one example of how blockchain technology can be utilized. And utilizing blockchain for your own business carries a number of advantages.

Blockchain doesn’t depend on an intrusive middle man. This means no government currency and also no third parties for verification.

In addition, transactions are spread across thousands, or perhaps even millions of computers – although only your blockchain network can access it. Thanks to this decentralization, data is never lost.

The data structure of a blockchain uses an append-only format. Ill-intentioned parties can not alter or delete data that has already been recorded. Naturally, this provides an extra layer of security.

Cryptography has Greek origins tracing back to the words hidden and secret. Even its modern denotation signifies a method of secure communication. Blockchain uses cryptography to encrypt the data stored within blocks, keeping everything extra secure.

Blocks can only be attached to the chain after going through a verification process that requires a consensus between ledger participants.

As blockchain is a distributed ledger, everyone in the network has access to the same documentation. These digital copies all root back to the same digital information so you don’t have a dozen individual copies of sensitive information.

Cost-efficiency is a basic tenet of blockchain technology. But blockchain is efficient in more than one way. When you trade using your traditional pen and paper, it slows down business operations.

Digital transactions are much faster, and therefore more efficient. At the same time, digital information makes it much easier to store and record important business assets, ensuring traceability.

Companies That Use Blockchain

Reasons to Hire a Blockchain Developer

The notion of software development is probably what brought you to this page, but the tech industry goes beyond making mobile and web apps. For example, if you’re a new business on the brink of setting up an online store you may not have put much thought into how to handle your finances.

Asking for credit card information is easy enough but how will you make sure that no one can access a user’s confidential information, or worse, hack your entire system? Blockchain is a real-world solution for your payment processing snd//or money transfer needs.

Withal, blockchain isn’t just some app on the app store. It’s an entire system and methodology and professionals who have expertise in the blockchain business have spent precious time learning it.

Core blockchain developers can build a blockchain system for your technology to utilize and Dapp developers can help you build a decentralized app like Bitcoin to service other businesses and hopefully top the markets as well.

Hiring a blockchain developer may be a difficult process if you don’t know what to look for. Unlike JavaScript or Python, Blockchain isn’t simply a programming language. It’s something with the potential to change how you keep your business assets secure for the better.

Of course, many tech-savvy professionals have also realized the wonders of blockchain and have dedicated their career to working with this emerging technology for the foreseeable future.

How do you hire a Blockchain developer?

For those who wish to take the high road and hire Blockchain developers on your own, we’re here to help.

What should you look for in a Blockchain developer?

High-level blockchain developers should have the following abilities:

How much do developers cost in the U.S.?

How much do developers cost in South America?

Due to economic differences between the United States and South America as a whole, the cost of offshoring software development is significantly lower than hiring full-time with U.S talent. For Senior Blockchain Developers in South America, the average salary is currently around $100,000 whereas a mid-level developer costs around $76,000.

How much do developers cost in Ukraine / Eastern Europe?

Eastern Europe shares very similar rates to South America, again due to the economic differences. When looking at salaries in Eastern Europe, data shows that a Senior Blockchain Developer costs around $100,000 on average. 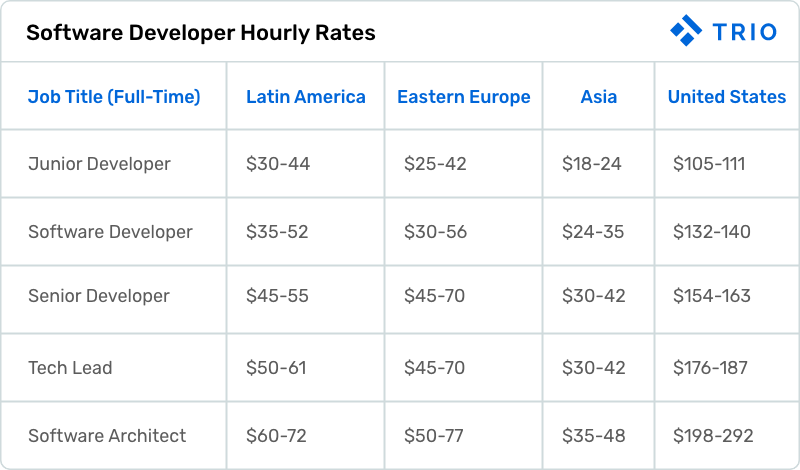 Why Hire a Blockchain Developer?

Trio Blockchain developers are pre-vetted, interviewed, and then trained further to become true software professionals, capable of adapting to situations that are both within and outside of the scope of their general expertise.

To learn more, tell us about your project and we’ll get you started.

Blockchain isn’t a programming or scripting language so the terminology of this kind doesn’t quite fit. That said, if you’re plugging blockchain tech into an app, you’ll probably need a back-end developer. But a front-end developer must make a user interface (UI) that functions well with the back-end.

Blockchain was invented in 2008 just after the Great Recession under the name Satoshi Nakamoto. As of today, this name has not been found to be officially associated with any one person or group.

Easy is not a common adjective for blockchain technology. Blockchain isn’t exceedingly difficult but you need to be well-versed in the technology to operate blockchain systems.

For the most part. Think of blockchain as a database – that’s not something you can charge money for. And most blockchain dapps like Bitcoin are open-source. But you will need to hire developers despite all this. Enterprise versions such as IBM’s Hyperledger have costs tied to them such as using IBM Cloud.