Searching for high-quality Swift developers? We got you covered! Trio has the resources and knowledge you need to start planning and executing your Swift project today.

Swift is a general-purpose language designed by Apple for iOS, macOS, watchOS, and tvOS to work with Apple’s Cocoa and Cocoa Touch frameworks as well as Objective-C.

Swift combines different aspects of older programming languages to provide a clean and modern syntax that is safe yet still performant.

What is a Swift Developer?

A Swift Developer is basically an iOS developer however they might also expand their knowledge to work on macOS and tvOS as well. In some rare cases, a Swift developer might have invested time learning Server-Side Swift as well as a web framework such as Kitura or Vapor.

Companies Who Use Swift

With iOS being the dominant mobile operating system in the United States, finding an iOS or Swift developer isn’t too difficult in comparison to their Android counterparts.

Even so, finding an iOS developer that can build a solid mobile app that performs well without unexpected crashes and bugs can be a bit of a challenge.

How to hire a Swift developer?

For those who wish to take the high road and hire Swift developers on your own, we’re still here to help.

What to look for in a Swift developer

At a high level, Swift developers should be able to:

How much do Swift developers cost in the U.S?

According to ZipRecruiter and other sources, the average annual pay for a Senior Swift Developer in the United States is between $74,000 and $178,500 a year. 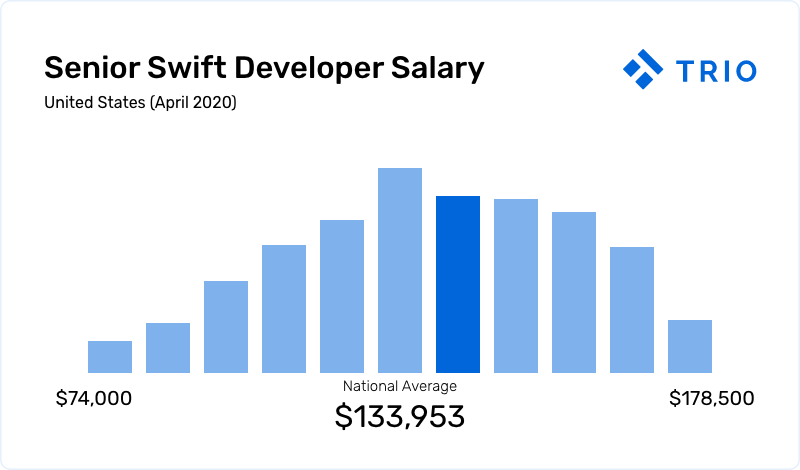 How much do Swift Developers cost in South America?

Due to economic differences between the United States and South America as a whole, the cost of offshoring software development is significantly lower than hiring full-time with U.S talent. For Senior Swift Developers in South America, the average salary is currently around $100,000 whereas a mid-level developer costs around $76,000.

How much do Swift Developers cost in Ukraine / Eastern Europe?

Eastern Europe shares very similar rates to South America, again due to the economic differences. When looking at salaries in Eastern Europe, data shows that a Senior Swift Developer costs around $100,000 on average. 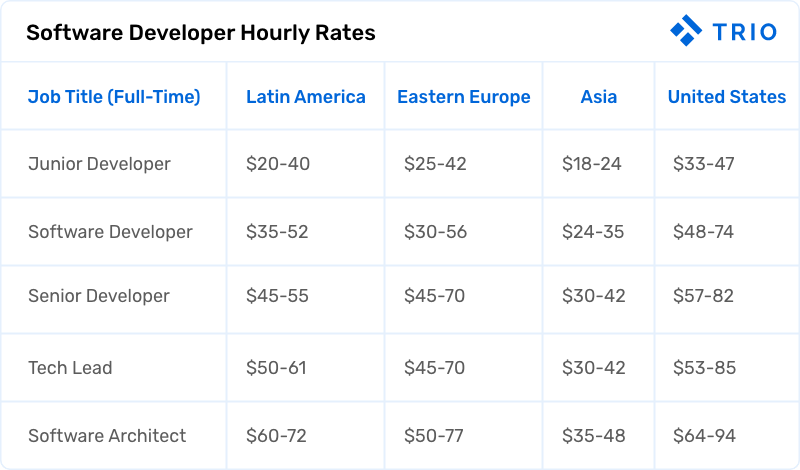 Why Hire a Swift developer

Trio Swift developers are pre-vetted, interviewed, and then trained further to become true software professionals, capable of adapting to situations that are both within and outside of the scope of their general expertise.