Trio has top senior software developers, consultants, software engineers, and experts available for hire. We'll help you find the best freelance developer for your job or project - chat with us now to get a shortlist of candidates.

Reasons to Hire Developers with Trio

Trio has top senior software developers, consultants, software engineers, and experts available for hire. We'll help you find the best freelance developer for your job or project - chat with us now to get a shortlist of candidates.

Getting Started
Get Started

Find your next
team member

How Trio Can Help

Work with us
How Trio Can Help

Focus on the things that matter. Trio manages recruiting, payroll, benefits, and compliance for all your developers

See how we compare

Focus on the things that matter. Trio manages recruiting, payroll, benefits, and compliance for all your developers

See how we compare

How do I hire a good developer?

Hiring a good developer takes time and experience with how software development works on both an operational and managerial level. Knowing what you are looking for when it comes to technical skills is a plus as well as knowing how to test their skills. Leveraging the power of job boards such as Indeed and LinkedIn Jobs can attract skilled developers looking for work.

How much does it cost to hire a developer?

The cost to hire a developer depends on your location. In the United States, a developer’s salary can be anywhere from $60,000 to $175,000 depending on their experience and prior work history.

How do remote developers work?

Remote developers work in the comfort of their homes by leveraging technologies such as Zoom and Slack to communicate with the rest of their team. Much of the development workflow is remote, such as pushing code onto GitHub or Bitbucket and they can manage their tasks using products such as Trello and Jira.

Where can I hire remote developers?

You can find remote developers on job boards such as Indeed, LinkedIn Jobs, and WeWorkRemotely. These three sites should give you more than enough candidates to screen and interview.

How do I find a remote developer?

Developers can be found on job boards such as Indeed, LinkedIn Jobs, and WeWorkRemotely. If you are just looking for a developer to do something more specific and focused, you can use freelance platforms such as Upwork. If you want to save time and avoid the interview process and the risk of working with a freelancer then you can work with a software development partner such as Trio to find you the talent that you need.

How to Hire a Developer

Hiring remote developers can be a time-consuming endeavor that requires knowledge and experience with software development in order to find the right fit.

There are a number of different ways to go about hiring a remote developer. First and foremost, it depends on what exactly you are looking for in terms of talent as well as the size and complexity of your project

For quick and easy projects, you might be better off finding a freelance developer through Upwork. With temporary jobs like this, you won’t need to worry too much about their skills. You’ll be able to gauge their quality by the reviews they get on the platform.

However, if you are looking to build out a web and/or mobile application, you’ll have to do your due diligence and put in a lot more effort to ensure that the developer you are hiring is not only technically proficient but has enough theoretical knowledge to truly lead your project from idea to launch

In this case, we recommend that you create a job listing.

A few job boards we recommend are:

These are the top sites currently, and there are plenty more. We’ve gone through the trouble of analyzing the site traffic for many job boards and found these to be the most popular.

Once you post your job listing you will immediately start receiving applications from candidates. At this point, it is your responsibility to filter them out and find the developer that is right for you. We have a complete guide on how to hire remote developers here, thank us later!

If you are looking to build a software product, you’ll need a developer.

More importantly, if you are a startup that’s building their first product, you’ll need someone who really can make the right decisions regarding:

Hiring remote developers has a number of benefits worth mentioning such as cost reduction and flexibility. Remote developers are also generally happier employees because they have more autonomy than a developer who is forced to come into the office every day.

While you might have to learn how to work with remote developers, it’s certainly worth the effort. And there are plenty of tools that you can use to make your life easier. Check out some of the tools we believe are the best at remote work and collaboration.

What to Look For in a Developer

At a high level, developers should:

Learn more about what a good developer looks like and 5 core skills they should have.

How much do Developers cost in the U.S?

The average salary for a Senior Developer is $119,651 per year in the United State, according to Ziprecruiter.com data. 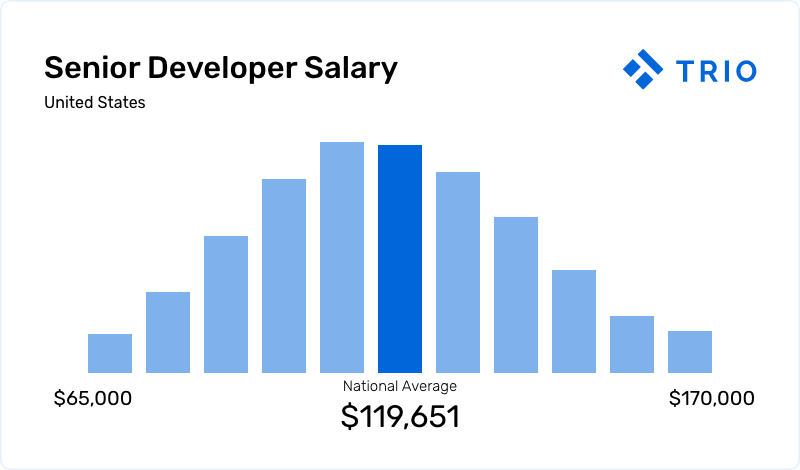 How much do Developers cost in South America?

Due to economic differences between the United States and South America as a whole, the cost of offshoring software development is significantly lower than hiring full-time with U.S talent. For Software Developers in South America, the average salary is currently around $100,000 whereas a mid-level developer costs around $76,000.

How much do Developers cost in Ukraine / Eastern Europe?

Eastern Europe shares very similar rates to South America, again due to the economic differences. When looking at salaries in Eastern Europe, data shows that a Senior Developer costs around $100,000 on average. 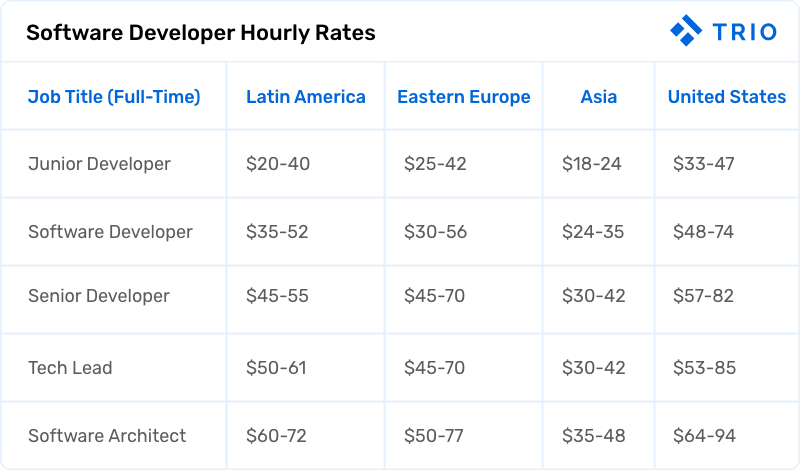 The freelance market is over-saturated with people calling themselves developers. Sure, they might be able to code their way out of a paper bag, but can they build a whole system front to back that can scale as your company grows? It’s unlikely.

Let’s take a look at some of the differences between freelance developers and Trio developers. 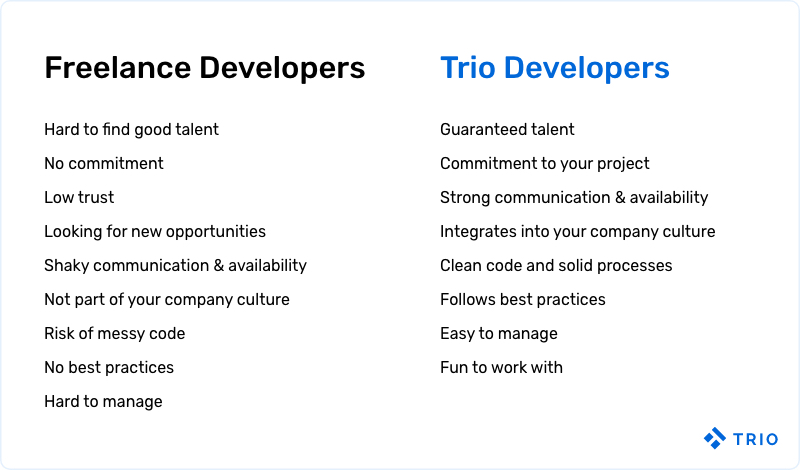 Hiring full-time developers is a great option when considering the size and complexity of your project. Naturally, you will want someone who can dedicate themselves to working on your project full-time with passion and care.

Finding the right developer can be time-consuming as previously mentioned and comes with a ton of unseen costs. Hiring developers through Trio makes finding a developer or building a team of developers a breeze. 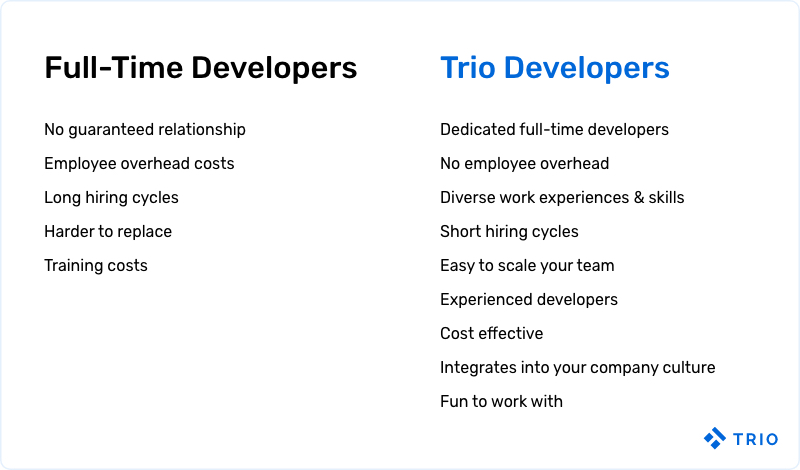 Why Hire Developers With Trio

Trio developers are pre-vetted, interviewed, and then trained further to become true software professionals, capable of adapting to situations that are both within and outside of the scope of their general expertise.